In a rare unanimous vote, the Dallas City Council passed a resolution to protect its citizens from the historically poor air quality in our region. Since 1991, the North Texas region has continuously failed federal air quality standards for ozone and smog pollution. The Dallas resolution follows a flurry of clean air advocacy from elected officials representing the region.

Last month, the Dallas County Commissioners Court approved a similar ozone-crackdown resolution. This came after a joint letter from U.S. Rep. Eddie Bernice Johnson and U.S. Rep. Marc Veasely to the EPA urging the federal agency to reign in the state’s ozone plan. For years, Texas’ state environmental agency (Texas Commission on Environmental Quality or TCEQ) has made inadequate plans to address smog and ozone levels in our region. Many clean air advocates criticize the state agency for being too soft and understating or even denying the well-known links between air pollution and human health impacts.

Scientists have known for years that ozone pollution is linked with respiratory illnesses like asthma that contribute to missed days of school, loss of productivity at work, and hospitalization. While the state agency is tasked with regulating and reducing air pollution in Texas, one of their lead scientists dismisses the health concerns of ozone – in fact, he argues that reducing ozone pollution will actually be more harmful to our health! The state’s toxicologist, Dr. Michael Honeycutt, has made some truly incredible claims:

“…lowering ozone concentrations would actually result in more deaths in some cities.”

“Since most people spend more than 90 percent of their time indoors, we… are rarely exposed to significant levels of ozone.”

I don’t know about him, but the majority of our community organizers spend several hours outdoors during the hottest and sometimes worst air quality days of the year, and we don’t think less air pollution is bad for our health.

The good news is, Dallas officials aren’t buying it either. By an undivided 15-0 vote, the Dallas City Council and Mayor voted to strengthen enforcement on the Clean Air Act, reduce pollution from large polluting facilities, and advocate for state laws that would help grow residential solar power production.

Texas Campaign for the Environment, along with ally organizations and individuals, testified in support of the resolution championed by Council member Sandy Greyson. We compared industrial pollution to driving around in a car without modern pollution controls. 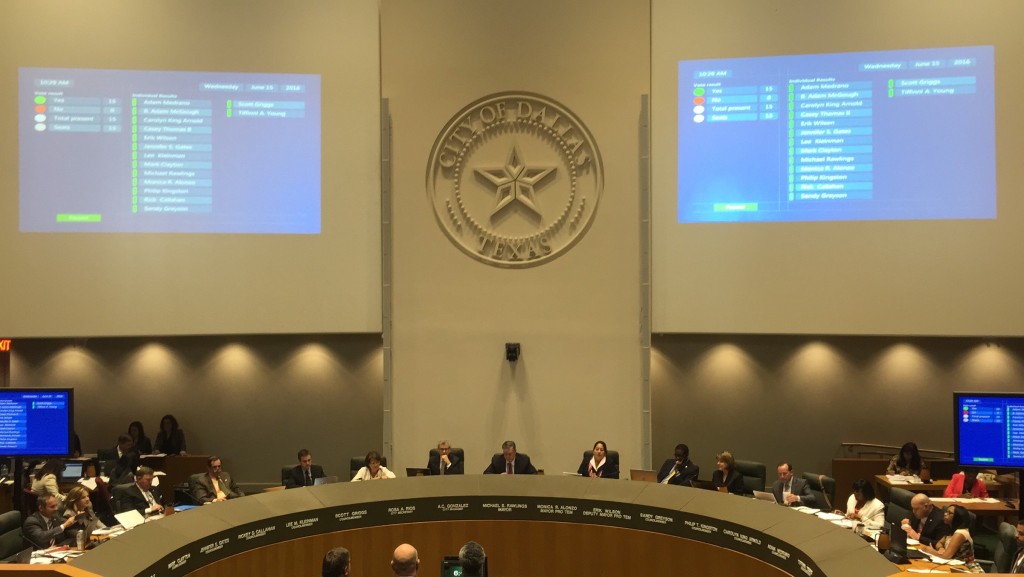 “If I did that and I got caught, I would be fined. And if I continued to do that for 25 years, correct me if I’m wrong, but I’d probably be in jail.”

This marks an important victory for air breathers and advocates in North Texas. While we celebrate this positive step, we will also be working to hold the state environment agency accountable to enforcing laws that protect public health, the environment, and our economy during the upcoming legislative session in Austin.

Here’s something you can do right now to help us take another important step in the right direction: Write a short letter to the Texas Railroad Commission, the state agency that regulates oil and gas production, to tighten their pollution enforcement as well. An official report for state lawmakers found that the Railroad Commission enforced only 16% of over 60,000 violations found at oil and gas well sites around the state. Texas regulators could do a whole lot better reigning in lawbreakers and protecting the citizens they are supposed to serve. Send your message today!