With all this talk of elections, polling forecasts, and mudslinging in every direction, we wanted to take moment to recognize some encouraging trends in Texas voting. We also want to provide some information that may help you vote with the environment in mind. I’m going to invite you to a post-election party, so read on!

Early voting has already begun in Texas—meaning you could go vote today. If you haven’t voted already: Bookmark this page. Find your polling location and go vote!

Early voting ends Friday, November 4th at 7:00 PM, and then your only other chance to vote is on Election Day, November 8th. While Texas Campaign for the Environment does not endorse any candidates for office, your participation is critical because your vote is one way to influence what happens at the local, state and national levels. 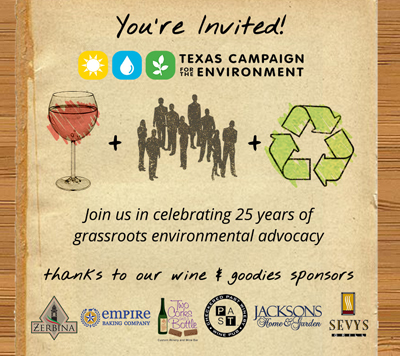 You’re invited: Sunday, November 13th (the weekend after the polls close), we’re hosting a house party for TCE, called Party for a Grape Cause. You are encouraged to bring your favorite bottle of wine to enter the wine raffle—winner takes all! There will be other raffle prizes, like local gift cards, wine tastings for you and your friends, and plenty of goodies for you to snack on. We’ve got great sponsorships from some of the best wineries in Dallas and beyond! You can purchase tickets on our website. This election season, no doubt, has many of us pulling our hair out, so join us to kick back and relish our participatory democracy.

Alright, off the soapbox and into the weeds. For the first time in history, Texas has exceeded the 15 million mark for registered voters. This election has seen the largest uptick in voter registration since 2000. Some counties in Texas have done better than others. Harris County saw a 6% increase in registration (which is a huge number of voters in the state’s largest county) and Travis County leads the state with a voter registration rate of 90%! The other good news is the gap between eligible voters and registered voters seems to be closing. After a negative trend since 2004, Texas is back up to about 78% of eligible voter registration. 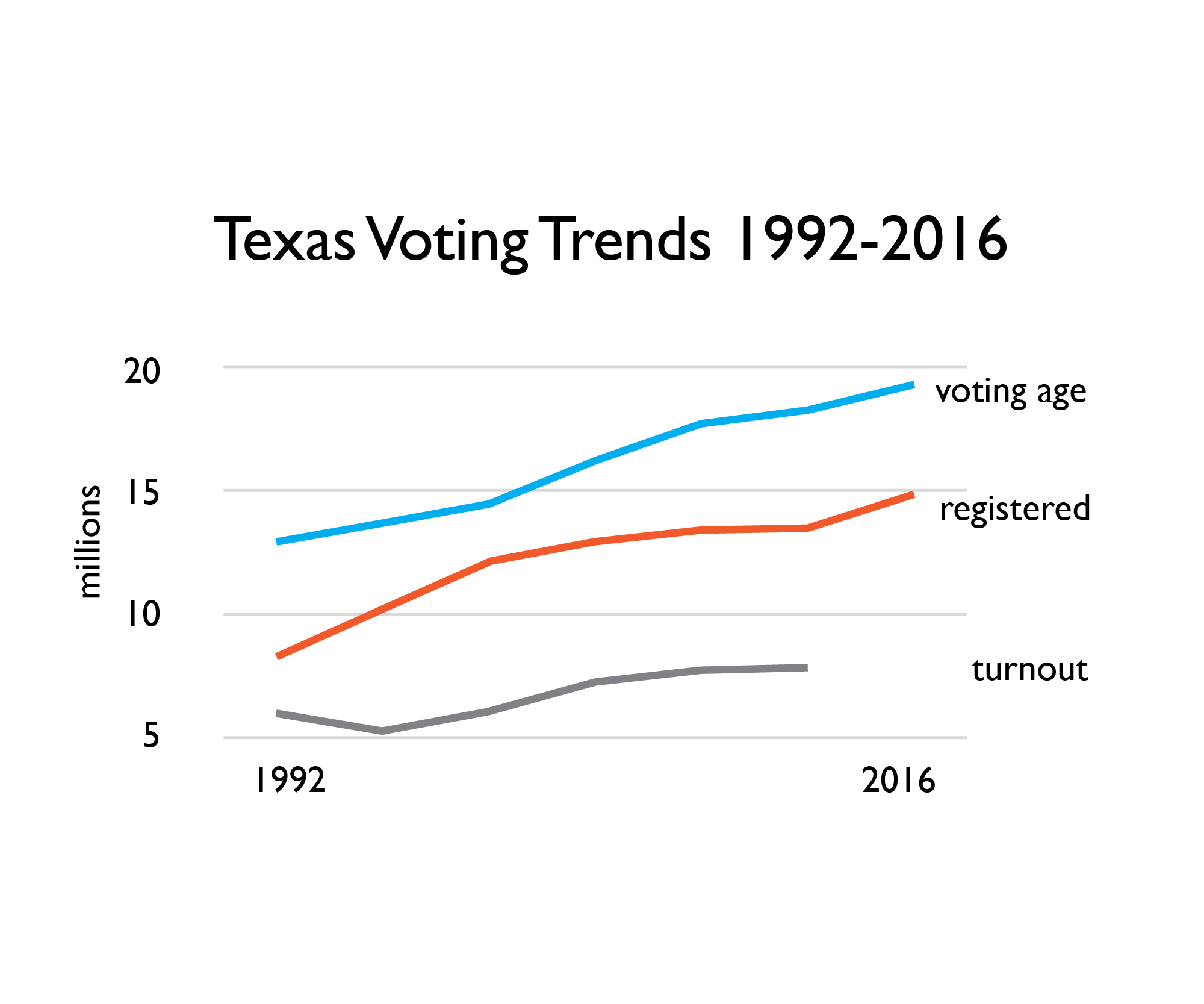 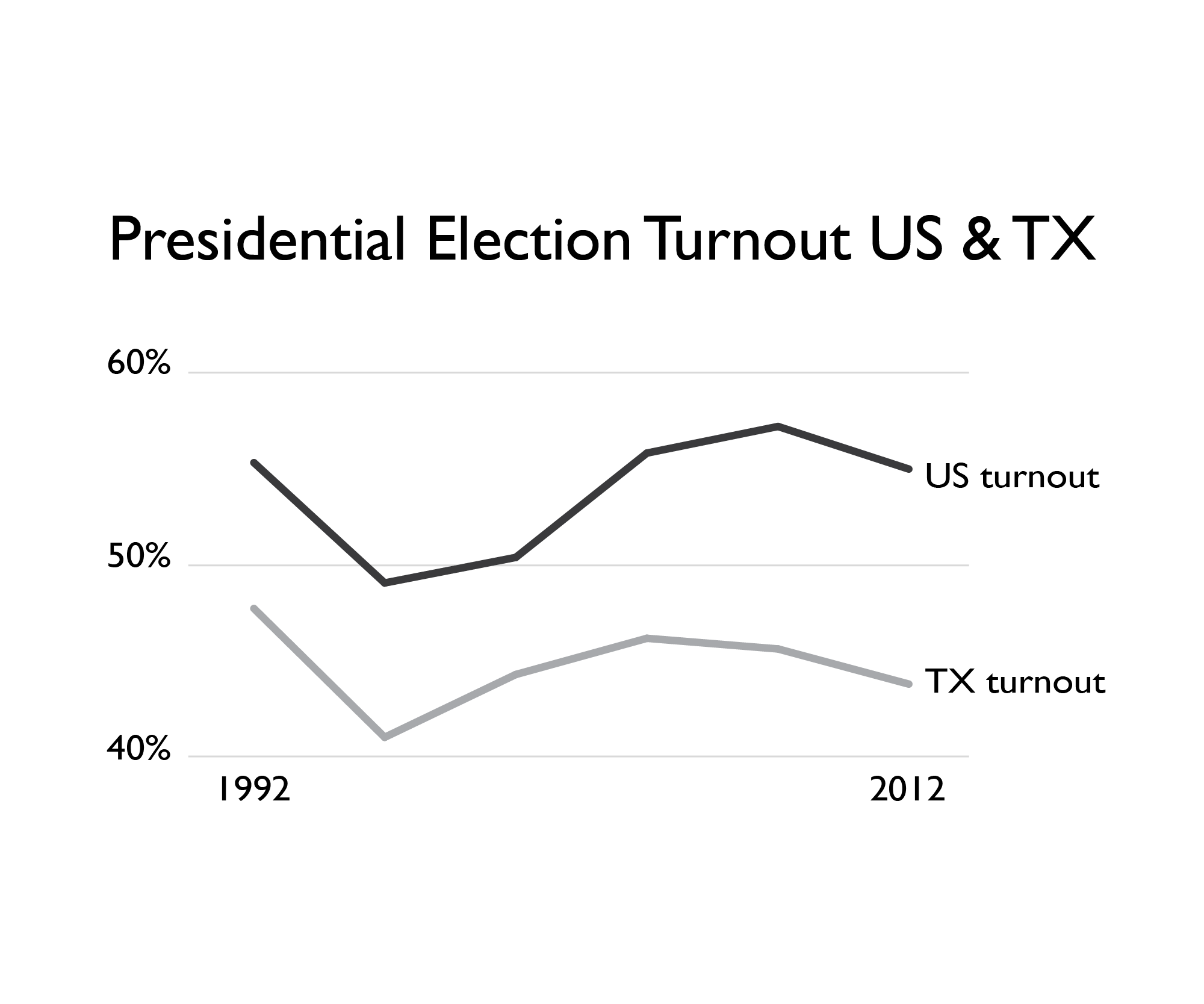 While history tells us Texas performs poorly in election turnout, we have until November 8th to change the story. There’s a million arguments for why you shouldn’t go to the polls—my vote doesn’t matter where I live, I don’t care for either candidate, we’re all doomed, etc. These arguments aside, here’s two truths about voting: (1) Democracy works best when you show up. 2) This election goes way beyond the next President.

Texas Lawmakers pass an average of 3.5 times the number of bills compared with U.S. Congress. By this measure, they are a much more productive body of government—and when you look at recent environmental legislation, much of it is bad news.

Texans have the opportunity to vote for scores of candidates in State House and Senate elections. You can find out about your state races through the Texas Tribune and see how they compare on the issues through League of Women Voters Texas non-partisan Voters Guide.

Our legislative priorities include reforming the Texas Railroad Commission (RRC), the agency that oversees oil and gas, coal mining, and nuclear development in Texas. Last year the agency was granted veto power over local ordinances on oil and gas drilling (see House Bill 40), and during the same year only punished 16% of violations at drilling sites. Elected lawmakers will determine during the Sunset Review process next year whether to make deep changes to this agency or continue business-as-usual. Additionally, one of the three commissioner seats for the Railroad Commission will be on every Texas ballot this November—you can see how the four candidates view changes to the agency on pages 4-5 of the LWV Voters Guide.

We are also working to pass our own bill on household battery recycling. We helped pass similar legislation for TVs and computers in Texas, which has resulted in the collection of over 412 million pounds of electronics for recycling. Our battery bill aims to do the same for the single-use and rechargeable batteries that many of us hoard in our office drawers and garages or throw in the trash because there is so little convenient recycling now.

Another emerging environmental problem TCE will be taking on is sewage sludge. As Texas’ population grows so does our sewage output. Much of the sludge produced in Texas is “land applied”—spread on agricultural lands as fertilizer. As you may have guessed, this sludge can have serious pathogens that cause health problems for neighbors and impact waterways, and it also contains concentrated pollutants like pharmaceuticals, PCBs, phthalates, and antibacterial chemicals like triclosan. TCE wants to keep sludge out of flood-prone areas, to add public protections when the state issues experimental permits for sludge disposal, and eliminate the use of industrial wastes as fertilizer among other protections. We are excited to work with impacted landowners on this crucial issue, a new one for us.

Finally, we will be fighting some big defensive battles at the Capitol this session, as anti-environmental bills inevitably make their way through the Texas House and Senate. The best thing you can do today is make sure you’re educated on the right choices for your state representatives and any local races and get out to vote!

Democracy starts with each and every one of us making a plan and the conscious decision to have our voice heard. Remember: It’s not enough to just RSVP, you gotta show up and vote! So show up!—and after that, show up to our post-election party!

You can get your tickets here. See you there.