Caoilin Krathaus and Lila Mankad, 12-year-old friends and classmates at Hogg Middle School, are sixth-graders on a campaign to save the world.

They enjoy typical hobbies such as reading, being outdoors, and camping, but they also have a common goal to make Houston more sustainable and waste free by starting a plastic bag ordinance.

They have joined forces together for the last three years to save Houston one bag at a time, and got together to talk about their initiative. 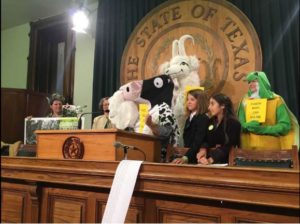 Krathaus and Mankad live near Woodland Park along Little White Oak Bayou, and it bothered the both of them that it was full of trash, much of it plastic bags.

“Instead of just complaining about it we decided to do something. We started a petition to the City of Houston and Mayor Turner to create an ordinance against plastic bags,” the girls said.

Since then, they have testified and lobbied in Austin at the capitol, held press conferences, participated in rallies, attended Texas Supreme Court meetings. They have also done email and social media campaigns, wrote letters to the editors, and have been active members of the Texas Campaign for the Environment.

Their latest project is working with Community Cloth, a nonprofit dedicated to giving refugee women an income by sewing or knitting items such as clothing.

Krathaus and Mankad, with help from their parents, recently got a grant of $1,000 from the Pollination Project to employ refugee women to sew reusable grocery bags from up-cycled materials. They are planning on selling the bags at the Earth Day celebration at Discover Green.

“And this is just the beginning,” they said.

They noted that, because of their persistence, they find that lots of people already know who they are.

“So many people are invested in cleaning up the city. It makes us good to realize this,” they said.

Perhaps another inspiration for their idea of a plastic bag free world comes from Krathaus’ mother, who is from Ireland. Ireland passed a plastic bag tax in 2002, which caused the use of them to drop significantly.

“Ireland has a population of the greater Houston region. If they can do it, certainly we can,” the girls said.

Plastic bags can be harmful in a number of ways, according to the girls. The bags can harm wildlife, and choke the bayous and storm drains. The bags eventually make their way into the Gulf of Mexico where sea turtles mistake them for jellyfish. Since plastic takes a long time to break down, there is no shortage to the damage it can cause.

The Krathaus and Mankad families practice what they preach. When shopping, they use their own reusable bags, and when dining out, they bring their own food containers for leftovers and take out.

“It was hard at first, but it seems crazy not to do it,” they said.

Their hope is that the Texas Supreme Court rules in favor of cities in Texas being able to have their own plastic bag ordinances.

“If so, we will push city council and the Mayor very hard to create a bag ordinance,” Krathaus and Mankad said.

If the Supreme Court does not rule in favor, the girls will go back to the Texas Capitol and lobby and testify once more.

“We will fight to the end on this issue. Our lives, health and future are at stake,” the girls said.

Krathaus and Mankad listed a few steps to take to make an effort to become plastic bag free.

First, bring reusable bags everywhere. If the reusable bags are forgotten, then try to carry the items in your hands, use a box, or load all of your items directly into your car. Try to not use produce bags, straws and Styrofoam containers, and use a reusable water bottle.

“Just try to be aware of all the plastic we use, and take baby steps,” they said.

Krathaus and Mankad’s petition, and a blog detailing their efforts, can be found at bagfreebayous.org.